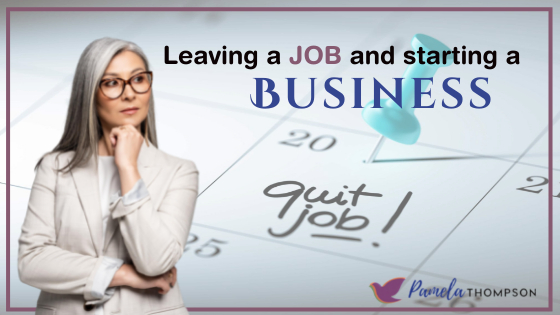 You may be at a point in your life where you’re feeling so done about having a “real” job.

You may realize you no longer are “juiced” by what you do, or perhaps you never were. Maybe you’ve been taking positions that don’t make your soul sing for the pay and the status.

Perhaps you have a position you enjoy but are working much harder and longer hours than you are being paid for and you’re starting to resent it.

I understand. I’ve been there. I can still remember when I made the decision to leave my well-paying government job with benefits to join a management consulting company on a handshake.

In the early 1990s, I attended a course on “Project Management in a Government Environment” where I ended up facilitating a small group and presenting the findings from our group. After the session, the trainer, who was a partner in a management consulting group, asked where I had learned to facilitate. I said, “I just do it”; I’m trained in therapeutic groups, and I used to do group and family therapy. He replied, “We need to talk.”

Six months later I was in the HR department of the government ministry I had been working for signing my resignation documents. At that time, I was informed I would lose the 3.5 years of contributions the government had made toward my pension plan if I left before the four-year mark. I thought for a moment about this and then realized I wanted to move forward. I was excited about trying something new and getting well paid to do it.

My Dad wondered why I would give up a good position and financial security without a contract. I knew in my heart and gut that this opportunity was the “carrot” I needed to become a consultant. Within six months of joining the consulting group, the partner who had brought me in had a philosophical split with the other two partners and started his own company. He asked me to join him, but I didn’t want to take sides. I started my own business, and the rest is history. Within two years I was making six figures and so enjoying working with my own clients. Since that time, I have launched four consulting and coaching businesses, have learned so much and been paid well. That said I needed the opportunity to work for another consulting group before I took the leap to strike out on my own.

I’m sharing this story and not recommending that you take the leap to start your own business if you feel undervalued, overworked, and perhaps underpaid, before taking into consideration some critical factors.

It is important to have some finances built up before you launch your own business. Contacts in the area you are planning to work in are important. I had co-chaired a national strategy for the federal government that had multiple partners. A number of them hired me as a facilitator and qualitative researcher to do studies for their organizations when I left my position, because they knew and trusted me. If you think you have consulting skills to offer it is helpful to join another consulting group to “learn the ropes”.

What about you? Are you thinking about “taking the leap” and striking out on your own? Perhaps you’ve done it and have some valuable lessons to share. I welcome your thoughts in the comments below.